"No one becomes 'not racist,' despite a tendency by Americans to identify themselves that way. We can only strive to be 'antiracist' on a daily basis, to continually rededicate ourselves to the lifelong task of overcoming our country’s racist heritage."

"Racism is a marriage of racist policies and racist ideas that produces and normalizes racial inequities."  (p. 17-18, How to Be an Antiracist)

Kendi then goes on to define racial inequity, racist policies, and racist ideas.

"Racial inequity is when two or more racial groups are not standing on approximately equal footing." (p. 18)

"A racist policy is any measure that produces or sustains racial inequity between racial groups. By policy, I mean written and unwritten laws, rules, procedures, processes, regulations, and guidelines that govern people." (p. 18)

"A racist idea is any idea that suggests one racial group is inferior to or superior to another racial group in any way. Racist ideas argue that the inferiorities and superiorities of racial groups explain racial inequities in society." (p. 20)

For more on these important distinctions and definitions, read pp. 17-23 of his book, How to Be an Antiracist.

According to the Merriam-Webster Dictionary, racism is:

1: a belief that race is the primary determinant of human traits and capacities and that racial differences produce an inherent superiority of a particular race.

2 a: a doctrine or political program based on the assumption of racism and designed to execute its principles

2 b: a political or social system founded on racism

According to Wikipedia, racism is defined as:

"...ideologies and practices that justify or cause or perpetuate unequal treatment of groups or individuals based on criteria of perceived racial or ethnical difference.[1] These can take the form of social actions, practices, beliefs, or political systems (e.g., apartheid) that consider different races to be ranked as inherently superior or inferior to each other, based on presumed shared inheritable traits, abilities, or qualities. It may also hold that members of different races should be treated differently.[2][3] Some variants include a belief in hierarchies of worth arising from biological differences between peoples.[4]"

1. Garner, 2009 in the book "Racisms: An Introduction" p. 11 summarizes different definitions of racism and concludes by listing three necessary elements of any definition of racism: 1. a historical power relationship, 2. a set of ideas (an ideology), 3. forms of discrimination (practices).

According to the Alberta Civil Liberties Research Centre, antiracism is:

"Antiracism is the active process of identifying and eliminating racism by changing systems, organizational structures, policies and practices and attitudes, so that power is redistributed and shared equitably." (NAC International Perspectives: Women and Global Solidarity)

How can I be an antiracist individual?

According to prominent author and professor of history and international relations, Ibram X. Kendi, it is not enough to simply say you are not racist. One must strive to be actively antiracist instead, through one's own thoughts, actions, and engagement with the world.

Part of working towards being an antiracist individual is recognizing that we are all racist -- it's part of the society in which we all live and participate. It takes conscious thought and engagement to work towards being antiracist. Kendi speaks to this by saying that: "'Racist' and 'antiracist' are like peelable name tags that are placed and replaced based on what someone is doing or not doing, supporting or expressing in each moment. These are not permanent tattoos. No one becomes a racist or antiracist. We can only strive to be one or the other." (p. 23)

Some concrete ways in which you can work towards being an antiracist individual are:

Check out this image, compiled by Andrew M. Ibrahim, MD, MSc, on antiracism: 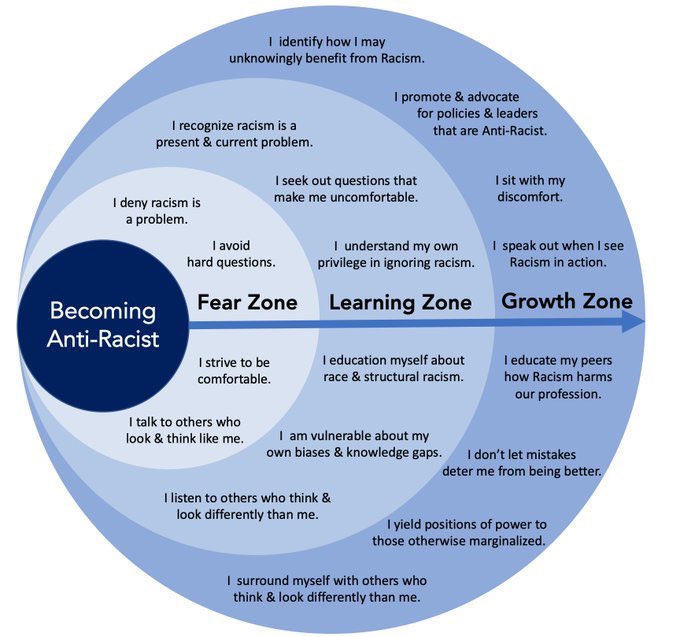 Want to learn more about racism and antiracism? Check out our Faculty & Staff Picks page for more books and suggested readings.

Check out this guide on talking about race from the National Museum of African American History & Culture.