Zines in the library

"Access to zines in libraries and archives carries an inherent tension." 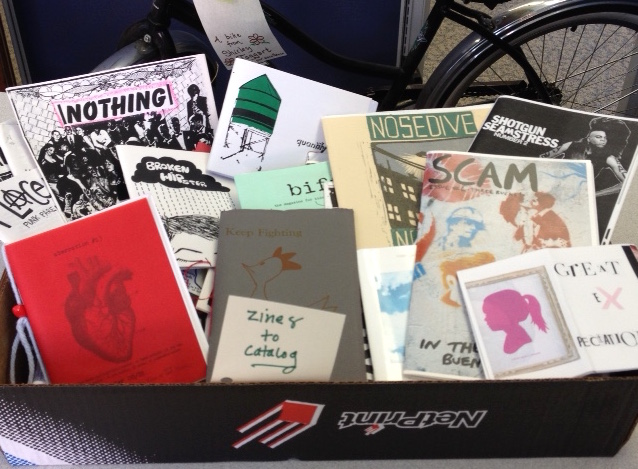 As zine librarians/archivists, we make every effort to broaden access and use through the most relevant and specific subject headings, summaries, and other notes.  This process is not infallible, and sometimes errors will happen, such as the use of headings that offend or do not resonate with zine creators.  (Code of Ethics)

Using terminology from standard vocabularies will make the zines you catalog more discoverable.  When zines turn up alongside books, movies, and other kinds of information in a catalog search, users will have greater access to alternative perspectives.  (Code of Ethics)

"We're in the process of cataloging a bunch of zines by women and girls from the mid 90s, and I have a question about when to apply Riot grrrl movement as a subject heading.  I generally prefer to apply it only when the zinester explicitly uses the term riot grrrl, but I've seen it applied to zines that have a riot grrrl feel, without claiming it.  On the one hand, I don't want to fail to apply it just because riot grrrl was so fundamental that a person didn't need to say it, on the other hand, I was a high school feminist in the early 90s who liked punk rock, but I sure wasn't a riot grrrl."

"I'm not a librarian, but I did do a punk-influenced feminist zine called OYA in the early 90s.  I didn't know about riot grrrl at the time and it had no influence on my starting the zine...  While it wouldn't exactly offend me to have it cataloged as a RG zine, it would be inaccurate, so maybe it would offend me a little that my work was being pigeonholed incorrectly.  So I would advise that unless it says something about RG in it to err on the side of caution.  Of course this would mean having to read the zine..."

Sasha Cagen, "SISTERHOOD WOULD HAVE BEEN POWERFUL:  notes on class and contemporary feminism" in Cupsize #5